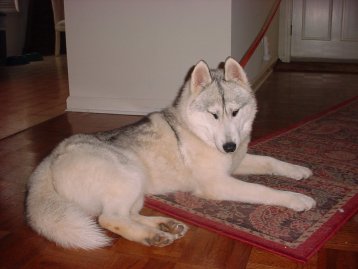 "The greatness of a nation and its moral progress can be judged by the way its animals are treated."
~ Gandhi ~

"If I have any beliefs about immortality it is that certain dogs I know will go to heaven, and very very few people."
~ James Thurber ~

"Never doubt that a small group of thoughtful, committed citizens can change the world. Indeed, it's the only thing that ever has."
~ Margaret Mead ~

"When a man has pity on all living creatures then only is he noble."
~ Buddha ~

"Until we have the courage to recognize cruelty for what it is--whether its victim is human or animal--we cannot expect things to be much better in this world... We cannot have peace among men whose hearts delight in killing any living creature. By every act that glorifies or even tolerates such moronic delight in killing we set back the progress of humanity."
~ Rachel Carson ~

The following story happened about four weeks ago. It is the wonderful tale of how an animal so loved it's owner, it would not stop till he had saved her life. This is the story of The Colonel, our Siberian rescue, and how he saved my wife's life. It is the story of how he said thank you!

A couple of years ago my wife and I were visiting family in Oklahoma. It was a cold evening when at about 10:30 in the evening we heard this "howling" on the front porch. We went out and saw this emaciated, cold, wet and injured animal. He was limping across our porch to the door.

No one recognized the animal. He was severely injured in his hind quarter and bleeding. We made him comfortable and warm, gave him some food, and stayed up with him for a while. The next day we took him to a Vet for X-rays. He had buck shot in his hind leg. Some rancher decided a .15 Cent bullet was worth his life. We spent several thousand dollars for multiple surgeries to get the lead out, and to stop the blood poisoning. 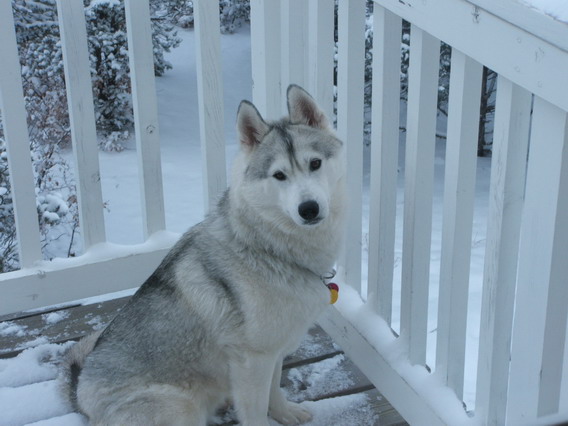 While recuperating in Oklahoma, he broke into the chicken coupe on two occasions and wiped out the chickens. We named him "The Colonel".

He has gotten progressively better, and has become as close as our children. He follows my wife everywhere, without hesitation. Every day they walk these hills and mountains together.

We take our dogs with us many times, and sometimes just pack them into the truck so we can take them out. 4 weeks ago my wife decided to go to the post office, and at the last minute decided to take Colonel. He normally lays quietly in the back jumper seat, happy just to be going for a ride.

As she was driving home (with a Police Officer behind her) the Colonel started to make a fuss. He started to slap her head with his paws, then started to bite her hair. She was getting alarmed as this was not normal for him. Then he became frantic and jumped into the front seat and started spinning around in 360 degree spins.

She slammed on the brakes so hard she thought the Police car would rear-end her. All of a sudden an SUV whose brakes failed coming down a mountain, came shooting across the road at over 50 miles per hour, 2 feet in front of her truck.

If Colonel had not accomplished what he set out to do..to stop the truck, She would have been broad-sided by the runaway SUV. She got out with the officer to aid the injured woman driver of the SUV. When she returned, Colonel was neatly and quietly tucked back up into the back seat. Quiet as a mouse. He even had a smile on his face.

"Wild animals never kill for sport. Man is the only one to whom the torture and death of his fellow creatures is amusing in itself."
~ Froude ~

"If a man aspires towards a righteous life, his first act of abstinence is from injury to animals."
~ Albert Einstein ~

"At the moment our human world is based on the suffering and destruction of millions of non-humans. To perceive this and to do something to change it in personal and public ways is to undergo a change of perception akin to a religious conversion. Nothing can ever be seen in quite the same way again because once you have admitted the terror and pain of other species you will, unless you resist conversion, be always aware of the endless permutations of suffering that support our society."
~ Arthur Conan Doyle ~

We have 71 guests and no members online