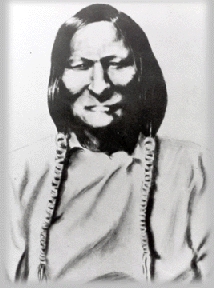 The despair of the Cheyenne dates back to the earliest known history. They were one of the many Algonquin-language tribes that ranged from the Rockies to the Great Lakes, north of the Missouri River. The Cheyenne, who called themselves Tstsehstahese, were located in Minnesota according to a map drawn in 1673 by the explorer Joliet. This was verified in February of 1680, when a group of Cheyenne visited with the explorer LaSalle.

Hunters and gatherers who were just beginning to practice agriculture, their world was impacted by hostile Sioux tribes. These powerful enemies, combined with the steady tide of white settlers, eventually drove them from their lakeland home. They migrated westward into what is now the eastern part of North Dakota, and within two generations adapted comfortably to plains life. Somewhere in the mid-1700's the Cheyenne acquired horses, and started using metal knives. For a while, life seemed good. The young men hunted buffalo, and at first the tribe continued to cultivate beans, corn and squash. Gradually they gave up their permanent homes to follow the herds and follow the weather, and the Cheyenne became nomads on the Great Plains.

Tribal rivalries caused the band to divide in the early 1800s. The Northern Cheyenne stayed above the Missouri, and the Southern Cheyenne moved to the banks of the Arkansas River, into western Kansas and eastern Colorado Territory.

As is often the case with displaced nomadic tribes in every part of the world, there was savage guerilla warfare between the various tribes who'd been pushed west onto the prairie. They'd come from different areas, and mostly had little or no knowledge of each other. It took a lot of time for them to work out their relationships. Whole villages, including the women and children, were wiped out. Brutalities and tortures were the tools in each tribe's war chest.

By about 1830, the Plains people began to make alliances, but they also found new enemies. The Southern Cheyenne made good-faith treaties, then fought along side the Arapaho, Kiowa, Kiowa-Apache and the Crow, against the Pawnees.

The Fort Laramie Treaty, signed in 1851, might have let this existence continue on the vast track of land ceded to them, but the 1859 Pikes Peak gold rush destroyed that frail hope. Animosity grew as more and more settlers and miners came into Cheyenne territory. In 1861, the government took over almost all of the Cheyenne land, and left them only Sand Creek, a small reservation in the Southeastern part of Colorado.

But Sand Creek was on poor, nearly barren land. It couldn't sustain the people. What little game was there was quickly depleted, and the nearest buffalo herds were over 200 miles away. When the buffalo began to disappear, young braves from all the tribes began making raids on farms and ranches, first for cattle but then for bloodshed, as they practiced the arts of guerilla warfare that they'd learned in the tribal wars. At the same time, the Comanche were responding to the encroachments on their territories with particularly harsh savagery.

This was the climate of the southern plains when Black Kettle was the chief of the Southern Cheyenne. A man known for heroic bravery against the Pawnees, Black Kettle was possessed of special knowledge of the white men. He was one of the Native Americans who'd been invited to see the East. He'd visited the cities in 1863, been to Washington D.C., and met President Abraham Lincoln. Having had this measure of the white man's number and power, he realized that the white men were not like the Pawnees, not like any foe he'd faced before. He recognized that there were vast numbers of white men who were rich, heavily armed, and determined to control the west. He knew that the Cheyenne could not win.

His knowledge was not shared nor accepted by all the Cheyenne. The young braves wanted to fight. While Black Kettle repeatedly tried to steer the tribe away from settlements, forts, railroads, and hunters, other leaders fanned the fires. There were many raids, many bloodlettings, on both sides.

At the same time Black Kettle was trying to calm his own people, the Governor of Colorado, John Evans, was trying to appease the settlers, who had seen the mutilated bodies of families murdered in guerilla raids. In 1864 he requested and received permission to issue an ultimatum requiring all friendly Indians to surrender, and warning that those who didn't come in to the local forts would be killed. A regiment of volunteers (who thusly avoided army duty against the Confederates) was raised specifically to fight and kill Indians. Colonel John Chivington promised, in a speech delivered in Denver in August 1864, that they would kill them all, little and big. In a phrase harking back to the reported Massacre of the Cherokee Children at Yahoo Falls, Kentucky, he said, "nits make lice." This became a battle cry for his troops.

Black Kettle, White Antelope and other Cheyenne chiefs met with Governor Evans in Denver in the fall of 1864. Black Kettle spoke eloquently, as he tried to make peace: "All we ask is that we have peace with the whites. We want to hold you by the hand. You are our father. We have been traveling through a cloud. The sky has been dark ever since the war began. These braves who are with me are willing to do what I say. We want to take good tidings home to our people, that they may sleep in peace. I want you to give all these chiefs of the soldiers here to understand that we are for peace, and that we have made peace, that we may not be mistaken by them for enemies. I have not come here with a little wolf bark, but have come to talk plain with you."

But Evans spoke from both sides of his mouth. He had already made commitments to his own people about the way he planned to solve the Indian problem. Even as he gave Black Kettle his hand, and sent his party home with promises, Evan's heart hardened.

In September of 1864, Black Kettle also met with Major Edward Wynkoop at Fort Weld, Colorado, and believed they had reached an understanding. He thought all he had to do to keep the peace was lead his people to the Sand Creek reservation.

But, as Governor Davis put it, the Colorado militia had been raised to kill Indians. Colonel John Chivington, leader of the Third Colorado Volunteers, led his troops to Sand Creek. He instructed the soldiers to take no prisoners, and again repeated, "nits make lice." Then, at dawn on November 29, 1864, he ordered the attack.

Even as the troops rode into the encampment, Black Kettle could not believe it was happening. While he was in Washington D.C., he'd been given an American flag by the Commissioner of Indian Affairs, Colonel Greenwood, and told that soldiers would never fire on anyone standing under the banner. So Black Kettle stood in the middle of the camp, holding up the Stars and Stripes with one hand, and a white flag with the other. He called to his people, and told them not to fear, the soldiers wouldn't hurt them. Dozens of the tribe hunkered with him under the flag.

And Colonel Chivington's troops surrounded them and fired directly into the crowd.

The battle lasted for eight hours, even though there were less than a hundred warriors trying to defend the camp. When they quit firing, the Colorado Volunteers moved through the camp, scalping, mutilating, bashing skulls, slicing off private parts for souvenirs, cutting off fingers to take rings, finishing off the women and children in a sickening display of inhumanity.

About five hundred Cheyenne escaped, including Black Kettle and his wife, though she was shot at least nine times. An estimated 200 were killed, most of them women and children. The soldiers also drove away six hundred horses that belonged to the tribe.

Not everyone approved this vicious slaughter. Captain Silas Soule and some of the other officers at Fort Lyon had spoken against the campaign, saying it was a disgrace to the U.S. Army. Forced to go along with Chivington or face court martial, they ordered their troops not to fire unless fired upon. Afterward, Chivington's troops denounced Soule and the Fort Lyon men, accusing them of cowardice. This prompted Soule to speak up and tell what he had seen. He wrote, in his report, "it was hard for me to see little children on their knees begging for their lives, to have their brains beaten out like dogs." In retaliation, he was murdered by a friend of Chivington.

But they couldn't silence the truth forever. Major Wynkoop knew, and also wrote a report about the slaughter of the peaceful band of refugees at Sand Creek. It was published on page one of the New York Tribune in December of 1864. A Congressional inquest eventually denounced Chivington's actions.

The next few years continued the dreadful pattern. Although Black Kettle asked his people not to retaliate, the troubles were not over. Younger and more militant warriors continued to raid settlers and immigrants. In 1865, a new treaty exchanged the Sand Creek reservation for land in Kansas, but not in the favored hunting grounds. Many warriors joined the Cheyenne war chief Roman Nose. Others moved north to join the band in Sioux territory.

General William Sherman tried to force them back to their assigned lands, and Roman Nose and his troops fought them to a standstill, briefly halting the wagon trains streaming across Kansas.

Once again the government forcibly moved the tribe, this time to Oklahoma, and in the Medicine Lodge Treaty of 1867, promised provisions. But they never came, and this caused more warriors to defect to Roman Nose. In the summer of '68, a series of raids on Kansas settlers prompted another full-scale military attack, and Roman Nose was killed that fall. At this point, many of the young warriors returned to Black Kettle's band.

General Philip Sheridan launched a winter assault on Cheyenne villages. Sheridan selected the Seventh Cavalry to spearhead the battle, under the leadership of George Armstrong Custer. 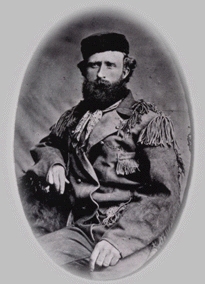 Turn away yours eyes; send your children from the room. What follows is only pain and sorrow. On the morning of November 27, 1868, Custer led his troops onto the Cheyenne reservation, to a village on the banks of the Washita River. It was all over by 10:00 a.m. Custer's men killed over a hundred, though it is reported that only eleven of these were warriors. They also captured many women and children.

Black Kettle fell in that massacre, along with his wife. They were trying to escape on horseback, when they were shot and killed on the banks of the river. An Osage guide, working for the Army, then took his scalp as souvenir. The Army torched all the lodges, destroyed the winter supplies of food and clothing, and killed the entire herd of horses, about 900 animals. The Southern Cheyenne were ruined; they lost all hope of independence on that day.

And that's pretty much the end of this sad story. A great and wise man, a brave warrior filled with decency, was senselessly destroyed and the dreams of a great tribe were finished.

But Black Kettle will not be forgotten. The Black Kettle Museum is located in Cheyenne, Oklahoma, and the Black Kettle National Grassland is nearby. The location is commemorated as the Washita Battlefield National Historic Site, with a visitors' center administered by the National Park Service.

But mostly, he lives in our hearts -- a good man with deep wisdom, who devoted his life to trying to lead his people to safety, working against forces too mighty to fight.

(Joyce Worley is proud of her Cherokee heritage. A well-known journalist and historian from Missouri, Joyce now resides in Nevada.)

We have 18 guests and no members online